Marthe Reed, age 59, died suddenly on April 10. She will be long remembered for her abiding love, and for the ethical vision that grounded her productive outrage at social injustice and environmental destruction, as well as for her enormous kindness to those in need. She was a scholar, a poet, an artist and a political activist. She held a BA (1982; Creative Writing) and MA (1990; English and American Literature) from the University of California San Diego, an MFA (1985; Poetry) from Brown University and a PhD (2008; English and Cultural Studies) from the University of Western Australia. Reed was the author of six books: Ark Hive (Operating System, forthcoming), Nights Reading (Lavender Ink, 2014), Pleth, with j hastain (Unlikely Books, 2013), (em)bodied bliss (Moria Books, 2013), Gaze (Black Radish Books, 2010), and Tender Box, A Wunderkammer (Lavender Ink, 2007). She was also co-editor, with Linda Russo, of an anthology of essays and poetry, Counter-Desecration: A Glossary for Writing in the Anthropocene, forthcoming from Wesleyan University Press. She has published chapbooks as part of the Dusie Kollektiv, as well as with above/ground press, Shirt Pocket Press, Smoking Glue Gun, and Locofo Chaps. Her poetry has been published in New American Writing, Golden Handcuffs Review, Entropy, New Orleans Review, HOW2, Fairy Tale Review, Exquisite Corpse, BlazeVOX, and The Offending Adam, among others. Her poetry reviews have appeared in Jacket2, Galatea Resurrects, Openned, Cut Bank, New Pages, The Rumpus and Rain Taxi. Reed guest edited the Dusie Ecopoethos Issue (#17), and was co-publisher and managing editor for Black Radish Books and publisher of Nous-zōt Press chapbooks.
Reed held a number of academic positions, including serving as the Director of the Creative Writing Program at UL Lafayette 2010-2013, and as a Humanities Faculty Fellow at Syracuse University 2015-2017. She is survived by her husband Mike Kalish, their two children Zeke and Marci, her two brothers Mike and John, her two sisters Malinda and Bess, two dogs, two cats, and a wide world of friends and admirers. Donations in her memory can be made to Planned Parenthood, Black Lives Matter, the Food Bank of CNY, or the National Resources Defense Council.

Posted by Nous-zot Press at 6:43 AM No comments:

Nous-zot Press is currently on sabbatical: September 1, 2016 -August 30, 2017. Copies of chapbooks may be ordered through the online store.

Laser cut cover for Eleni's chapbook with metallic vellum verso, as well as two views of the globe pages constructed.

Purchase copies at our online store! 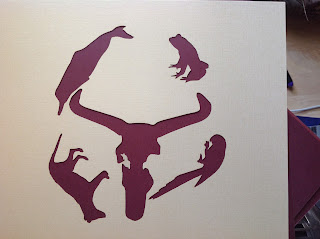 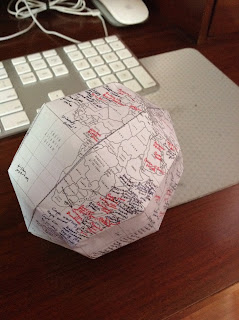 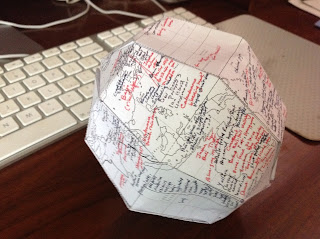 Eleni Sikelianos' How to Assemble the Animal Globe

Nous-zōt's Spring 2016 is going out with a BANG! Eleni Sikelianos' gorgeous chapbook How   to   Assemble   the   Animal   Globe, an excerpt from her forthcoming book from Coffee House Press. This mock-up does not give justice to the metallic gold cover or the metallic violet vellum endpaper which will show through where the animal figures will be cut away. 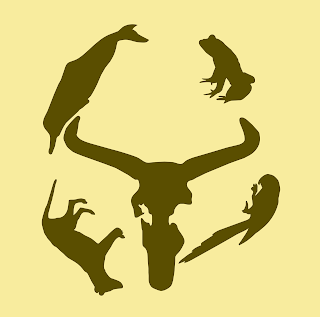 Here is a sample cut-out being laser cut.

How   to   Assemble   the   Animal   Globe  will feature five animal images by artist Christine Lee: an extinct animal from each of the following -- Africa, Asia, Americas, Europe, Australia/Oceania, and Antarctica. This stab-bound chapbook also features removable pages for constructing your own Animal Globe, the sections hand-annotated by Eleni with the names of extinct animals. Available for pre-order at the Nous-zōt online shop.

its blue
hue
beckoned
to which side
of blue
it had to drink daily
which made it easy (to shoot)
eating the best
red grass, spear grass, love grass
blue from dark skin showing thru
If you travel to Uppsalla, Capetown or London you might glimpse one
of the three remaining pairs of horns
A skull in Glasgow, one in Amsterdam
The four mounted specimens (Vienna, Stockholm, Paris, Leiden)
show no sheen of blue

Posted by Nous-zot Press at 8:02 AM No comments:

Nous-zot author Carolyn Hembree was been awarded 2015 Louise Bogan Award Winner for her ms Rigging A Chevy into a Time Machine and Other Ways to Escape A Plague. The annual award is for a book of poems contributing in an innovative and distinctive way to American poetry. The book is slated to be published in the spring of 2016. An excerpt from Hembree's manuscript appears as a 2015 NZP chapbook: Fever Dreams in Tongues without Skulls. 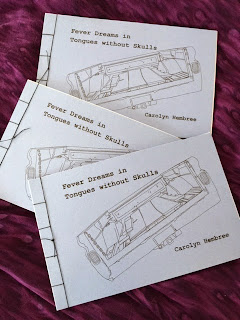 Posted by Nous-zot Press at 6:20 PM No comments:

Ready to post tomorrow morning -- I finished stitching Bridget's chaps today. Order a copy of Sun Creatures, or any of the others NZP titles at the Nous-zot online store. 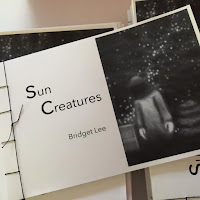 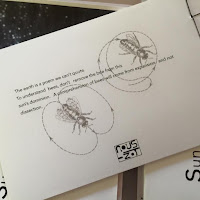 Posted by Nous-zot Press at 4:45 PM No comments:

Nearly ready to begin printing Bridget Lee's chapbook, Sun Creatures, lyric and innovative all at once, these poems meditate on bees, the one who keeps them, and the environmental crisis and the root of our world. 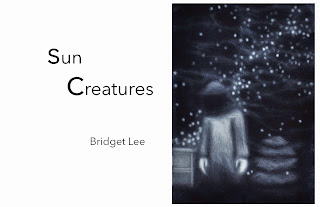 
Out by the train-tracks where small red poppies persist in growing   bees go. Out by the trash bins, buttercups,   addled with bees.    These fragments are what I can’t see between. These are what I retreat from. I’ll call the sun a train with a hundred wheels. I’ll call it bearing down. Throw poppy    apple   vetch   from the windows of cars.   Cast them as questions    what are we   what are we   what are we?
Posted by Nous-zot Press at 8:36 AM No comments: